This is a beautiful film, gorgeously photographed in black & white, casual and breathtaking at the same time, impeccably choreographed, alive with the mystery that is life.  Yeah, I really liked it.  Best to see it on the big screen.  This trailer just appeared to remind me of the films transcendent greatness.  The Pink Floyd music (not used in the actual film) really sells it.

From 1932 comes this pre-code (meaning it’s somewhat racier than the typical fare of the period, but innocuous by today’s standards) strange & weird film Island of Lost Souls featuring a hammy Charles Laughton in the role of Dr. Moreau, a “mad” scientist who conducts horrible, painful experiments on animals, turning them into human like beasts.  His masterpiece is the Panther Woman (featured in the lobby card below).  Needless to say, shit goes bad, and it doesn’t end well for Dr. Moreau.  Atmospheric cinematography by the great Karl Struss. 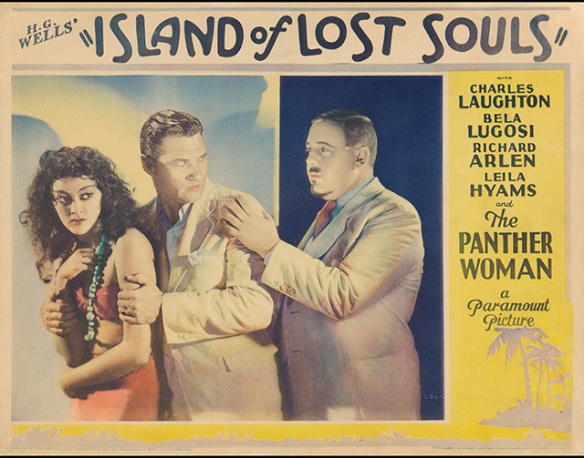 The original 1959 Russian film “Nebo Zovyot” (The Sky Calls) was dubbed and re-edited for American audiences by Roger Corman, who hired a young film maker named Francis Ford Coppola to do the job.  Coppola shot additional sequences featuring the penis & vagina creatures seen prominently  in the trailer (and lobby card)!  Greatness has to start somewhere. 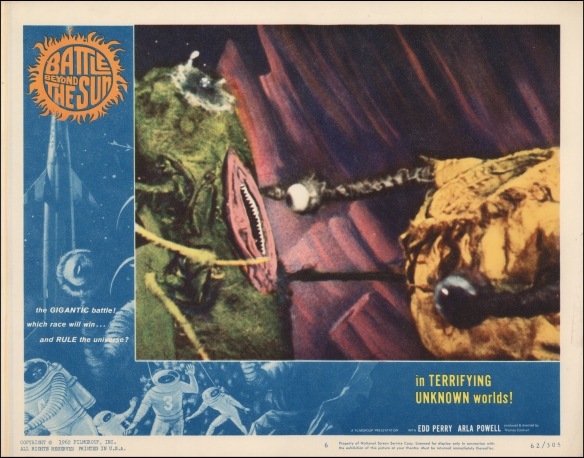 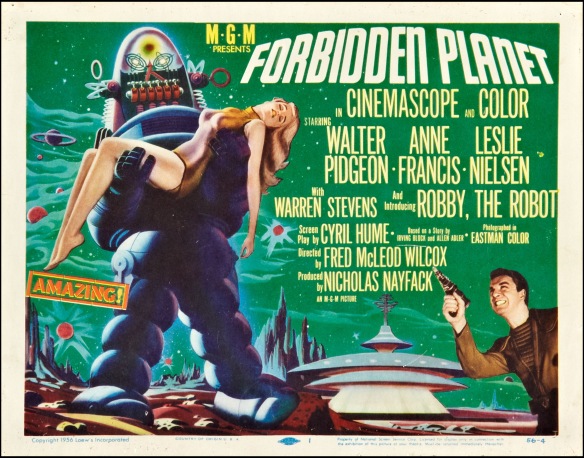 Forbidden Planet was MGM’s lavish entry into the pantheon of great 1950’s Science-Fiction Films.  The plot was loosely based on Shakespeare’s “The Tempest” (I never read it either, but there’s a recent film version with Helen Mirren, maybe I should check it out).  The film begins in space, aboard Starship C-57D as it approaches the planet Altair IV.  The crew is tasked with determining the fate of a previous expedition to same planet (some 20 years before). Prior to landing, they are contacted by a survivor of that expedition, the scientist Morbius (one of the coolest Science-Fiction names, by the way, up there with Klaatu), and are warned not to land, due to some unspecified danger.  Of course, they stubbornly land anyways, and are greeted by Morbius, his nubile young daughter Altaira and their super cool robot named Robby.  They appear to be living comfortably in an ultra modern house beautifully situated in the alien landscape of Altair IV (sort of looks like the desert southwest but with green skies).  But, there is a terrifying invisible monster lurking out there, which seems bent on killing members of the crew of C-57D (but does not seem to have a beef with Morbius & his daughter).  Also, it turns out, Morbius’s house is situated above the remnants of an extinct civilization called the Krell, and in an impressive reveal, Morbius gives the Captain and a few crew members a tour of a vast (still functioning) underground Krell city which fucking blows their minds to say the least.  Morbius demonstrates a Krell machine which sort of lets you fabricate shit right out of your own mind.  Turns out, that machine, why the Krell went extinct, and what the hell the invisible monster is, are all related.

Here’s an interesting documentary on Forbidden Planet (in 2 parts):

One of the ground breaking things about the film was the the electronic “score” created by  Bebe and Louis Barron (which is discussed in part 2 of the documentary).  Here’s a great short video where the great Sound Designer Ben Burtt re-creates some of the sound for Forbidden Planet, explaining how it was done using 1950’s technology: 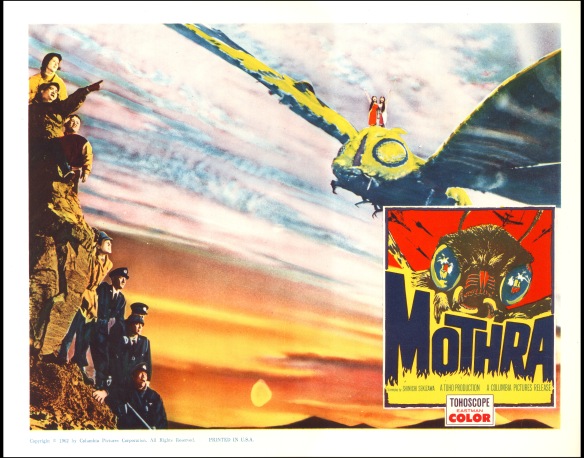 On an expedition to a “supposedly” uninhabited island where atomic tests have been conducted, a native tribe is discovered that worships a giant egg named Mothra (actually Mosura).  There are also 2 tiny twin girls (only 12 inches high) who sing a cool “Mo-su-ra” song, and they end up getting kidnapped, taken back to Tokyo where they perform the “Mo-su-ra” song in a show.  Turns out the song helps to awaken the egg which hatches into a giant caterpillar which swims across the ocean, destroying everything in its path, in order to rescue the girls.  Somewhere along the way, the caterpillar spins a cocoon and hatches out into a giant moth, wreaks even more havoc and eventually flies the tiny girls back home (or something like that).

Let us reflect on the madness of reefer.

I’ve been suffering from “bloger block” this month and wanted to get up at least one measly post before the end of the month.  Looking at my Lobby Card collection for inspiration, I decided to feature Faster, Pussycat! Kill! Kill!, and subsequently got sucked into YouTube looking for a trailer.  Instead, I decided to feature this hilarious clip from another Meyer film MotorPsycho, involving a rattlesnake.  I didn’t come up with “King of the Nudies”, it’s on Russ Meyer’s gravestone. 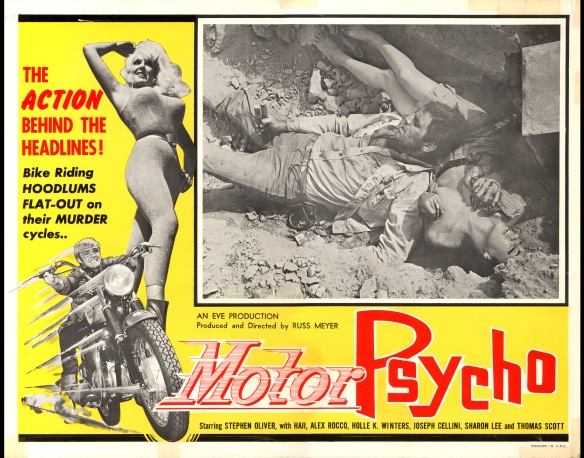 Hey!  I did not realize that the actor featured in the MotorPsycho rattlesnake scene was Alex Rocco, famous for portraying Moe Greene in the Godfather! 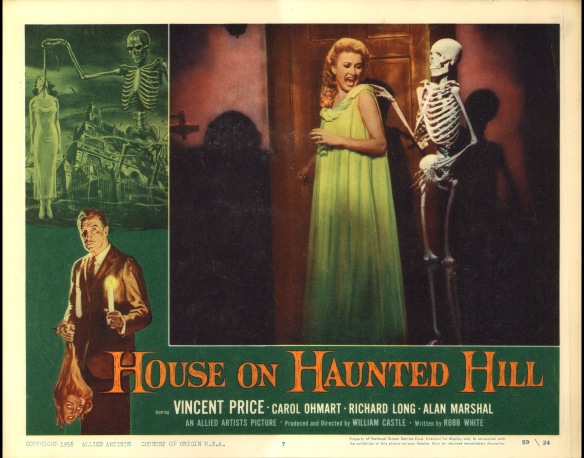 We used to watch this entertaining film on TV when I was young.  Vincent Price stars as an eccentric millionaire, who, along with his 4th wife, invite 5 people to their “haunted house” party.  The seemingly random invitees are offered $10,000 each, if they are brave enough to spend the night in their creepy house.  Crazy, strange & inexplicable (well, maybe explicable) stuff happens to each of the guests, but mainly it seems that Vincent Price just wants to scare his annoying wife to death, which he does, by using a full size marionette of a skeleton, getting her to fall into a convenient pool of acid he maintains in the basement.  Great sound effects & music, by the way! Here’s the entire movie on YouTube!!!  Watch the very beginning and end, for the fabulous intro and outro by Elisha Cook Jr. 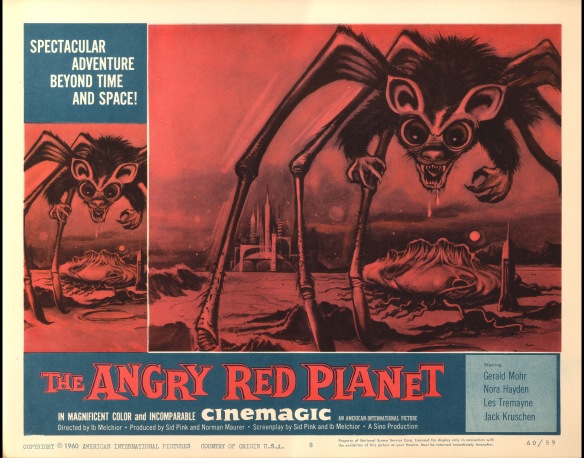 Today, we can enjoy the great Ridley Scott film adaptation of  The Martian but let us not forget the many, many Mars films which preceded it, like, for example, The Angry Red Planet released in 1959.  I actually saw this film in a movie theatre when I was 9 years old!  Even then, I was not fooled by the cartoonish special effects, but still, I was taken in by the film’s overall “weird factor” which was highlighted by the grim seriousness of the actors portraying the first earthlings to travel to the “angry” red planet and suffer through quite a traumatic experience.  Written & Directed by Ib Melchoir who would later go on to write another Mars epic:  Robinson Crusoe on Mars released in 1964 (I find out that Ib Melchoir just passed away this year at age 98!).  Supposedly, the strange look of the Martian scenes resulted from a film developing error, which Melchoir decided to exploit, hoping to camouflage the fake looking special effects.  Say what you will about the quality of the film, it has managed to stay lodged in my memory for over 50 years, and that’s a good thing!

Rather than post up a trailer, here is a scene from the film, wherein our intrepid explorers encounter a gigantic and horrible Martian “Bat/Spider Monster” which they (at first) mistake for a Martian tree.  (I love it that they are equipped with machetes):

Note the comma (between Island and Earth).  Sometimes it’s there, sometimes not.  The comma pointedly appears in the original poster art from 1955: 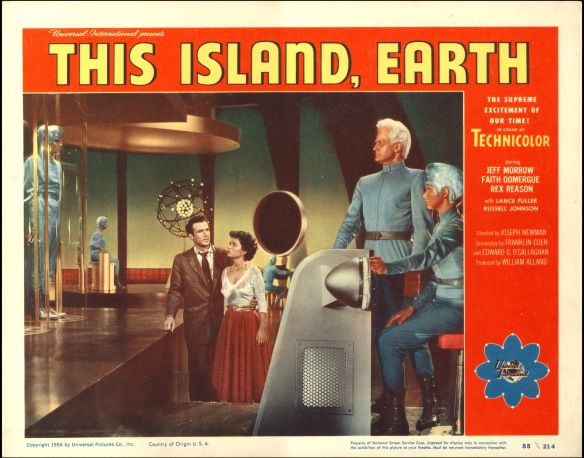 And yet, somebody decided to omit it on the 1964 re-issue posters.  Maybe some studio bigwig thought it was too arty and confusing for movie goers back in the day, go figure: 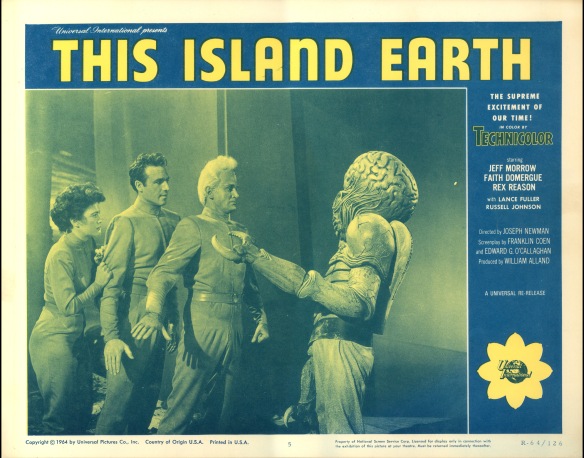 No matter, the film today remains a classic of 1950s Science Fiction with plenty of weirdness.  A big budget affair from Universal Studios with lavish special effects all in beautiful Technicolor, and probably overshadowed by MGM’s production Forbidden Planet which came along about 9 months later.

Earths best scientists are (unknowingly) recruited by (they later find out) aliens from the planet Metaluna, which is dying and (they later find out) under attack from the Zagons (never explained).  The scientists, at first, don’t notice that the Metalunans look sort of  like earthlings, except they have rather high and bumpy foreheads with unusual gray hair.  Anyhow, 2 of the scientists are kidnapped by the Metalunan named Exeter, and taken to Metaluna, where they witness “The Supreme Excitement of Our Time” (according to the films advertising campaign).  Turns out, the Metalunans intend to bail out on Metaluna, and relocate to Earth and subjugate our free will.  Thankfully, however, the plan doesn’t come to fruition as Exeter bravely saves the earth scientists (just before the Zagons destroy Metaluna) and returns them to Earth (which is none the wiser).  Kinda makes you wonder about our place in the Universe:  This Island, (pause) Earth.  I think I prefer the comma!